The Realtor and the Roof Rake

Around the home, WI Odds and Ends 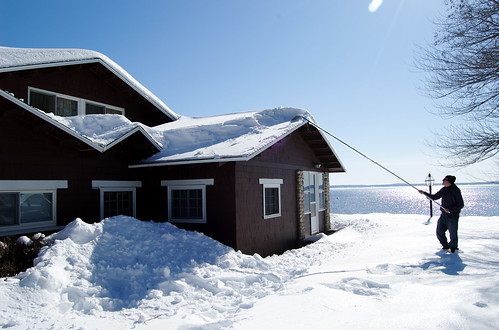 Being the ex-Southern Californian I am… snow is just beyond my comprehension. I hate how it falls from the sky, all shimmering and glittering with the preconditioned mindset of making my life a living hell. Mother Nature always chooses her timing wisely, always when I’m alone with our two daughters that weigh 100 pounds soaking wet combined with towels on their heads.

I knew the storm was coming, stocked up on household items…..the really important stuff like ice cream, cheese and crackers, wine and hot cocoa. Made sure I had batteries and gas for the generator in case the power went out and I called the snow plow guy to make sure that the driveway would be cleared. I was quite proud being ready for snowmageddon…. I am woman – hear me roar.

When I woke up to our wonderful Wisconsin winter wonderland, I viewed every vantage point from the windows of my toasty house. I even gave myself a pat on the back over my first cup of coffee that all was good and I had done it~ survived my first blizzard. My youngest wanted to go outside and play over at the neighbors and as I quickly pulled on my boots and shoveled out the back door, I saw it – the Beast on my back roof. Seven feet of glistening snow mocking me. Perfect. Day. Ruined.

I thought to myself…Ha, I have a Roof Rake. I’m going to lop that puppy up there and handle YOU, you seven foot snow drift…you’re no match for me and my Roof Rake. I stand humbly corrected…. The seven feet of snow on the roof kicked my fanny in about two seconds flat~ and as tempted as I was to simply let the roof cave in and set that puppy on fire with a blow torch while sipping a margarita from the warmth of my family room, I thought better of it and started the arduous task of the snow drifts.

A Roof Rake is a simple shovel lopsided & attached to long poles that extend by several attachments and reach the highest points of your home to remove snow. After the terrible blizzard, there were several reports of roofs collapsing and it is imperative, especially during a heavy snow, that the weight be taken off the structure of your home.  While it is a workout and not recommended for anyone with a heart condition, don’t neglect your roof during a heavy snow storm. ( Hopefully,  if the Ground Hog was right- roof rakes will be on sale soon and well worth the investment)

Dont forget about Gutter Heat Strips, a simple fix for ice heaving and ceiling leaks during heavy periods of cold weather, and extra bags of salt for icy walkways and driveways. Some simple pre-planning for winter weather is well worth it.