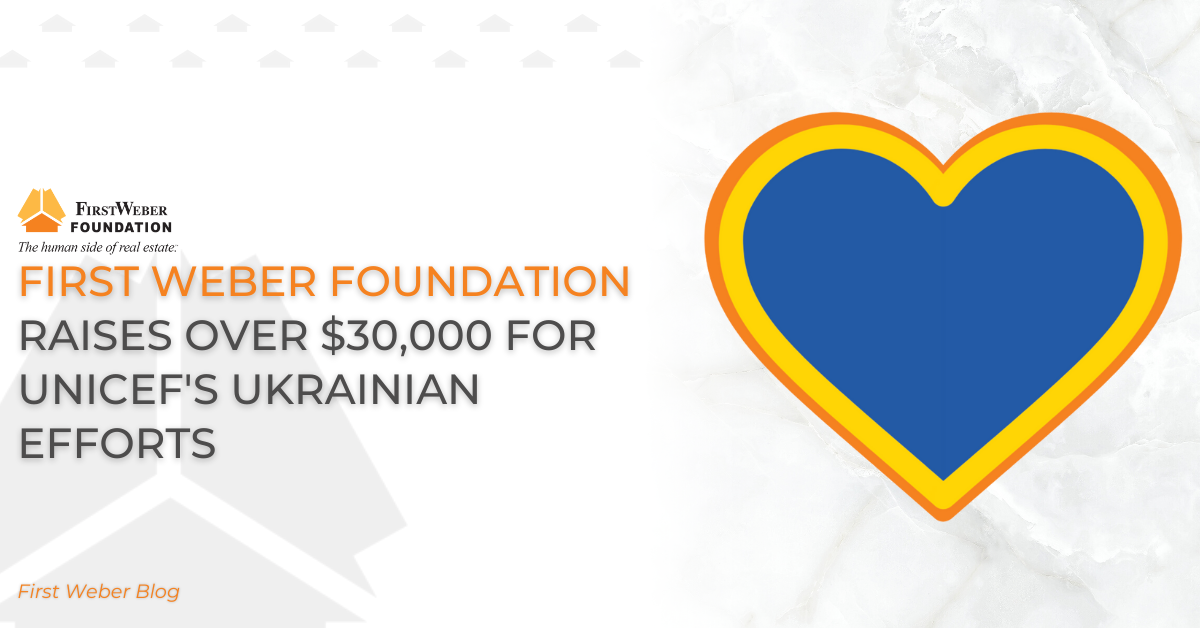 While the last of the pledges filter in, the First Weber Foundation is bursting with pride over how First Weber’s agents and staff stepped up to help the Foundation make a difference in some way for the families in Ukraine.

When First Weber agents and staff heard about the invasion of Ukraine, they understood immediately the heartache these families were facing. Housing is our business: How could we not look around our own homes and ask ourselves, if we were in their position, how would we be able to make quick decisions about what to take with us and what to leave, not knowing if and when you would be coming back, or to what.

Calls started coming into the Foundation, and the Board Members felt we had to do something. Following the guidance of a statement issued by the National Association of REALTORS, the Foundation Board chose to raise funds for UNICEF’s efforts in Ukraine.

Like many great stories, ours was a simple mission: Have a company-wide fundraiser, allow the public to participate, and raise money to send to UNICEF. The Foundation Board voted to match up to $5,000 of the funds raised, hoping to send at least $10,000 on for UNICEF.

The Foundation launched a Paypal fundraising page and agents and staff were able to share it on social media, or through email with their own networks of friends, family, clients & customers. As it happened, the Foundation Board’s quarterly meeting was scheduled for March 23. Donations began to pick up speed as word about the fundraiser spread, and having surpassed $5,000, the Board voted at its meeting to raise the match to $10,000. As news of the increase in the match got out, it was necessary to extend the collection to accommodate the growing interest in the collection.

By the time the Paypal link was closed, we had collected almost $15,000, and the checks were still coming. Just a week after the match was raised to $10,000, the Foundation Board voted to raise the match for a third time, to $15,000! The First Weber Foundation would be sending more than $30,000 to UNICEF to help vulnerable children and families in Ukraine.

At the time of this post, donations have climbed to almost $16,000. The Foundation Board members are overwhelmed by the generosity and compassion of First Weber’s agents and staff. Foundation Chair and Chairman Emeritus of First Weber Jim Imhoff, similar to a proud parent, reflects on the spirit of the First Weber family: “When we developed our tagline, ‘The Human Side of Real Estate,’ we were trying to communicate that we bring a human element to every transaction, that we understand what sellers and buyers are going through, and we’re there with them. This fundraiser for UNICEF has proven that our agents care about more than just their sales, but about all people, everywhere.”

Tammy Maddente, President of First Weber and of the Foundation Board, added her thoughts: “First Weber people are the best, showing up to support the community is important to us. The Foundation’s focus is on housing-related issues, and UNICEF’s goal to help displaced children and families is a broad scope of what the Foundation was created to do. We make a difference in Wisconsin, in every community we’re in, and now we are making a difference across the world.”